Navistar’s new MaxxForce family of diesel engines, released in 2007 leading up to the 2008 model year, included ground-up designs like the 11, 13 and 15, as well as updates to some older designs to make them comply with new EPA 2007 regulations. The VT275 got an EGR system to become the MaxxForce5 (Read about the MaxxForce 5 Turbochargers here), and the famous DT466 became the MaxxForce DT, to retain at least a little bit of that decades-long brand equity. The MaxxForce 7 lands somewhere in between.

The MaxxForce 7 served as a replacement for the VT365, which is also known as the Ford 6.0L Power Stroke. While it got new emissions equipment just like the rest of the MaxxForce line, engineers also took the opportunity to update engine’s base specifics as well. Stroke remained the same at 105mm but bore increased from 95mm to 98.3mm for more low-end torque, bringing overall displacement from 6.0L (363.3 ci) to 6.4L (388.7ci). This update translated over to the Ford Power Stroke diesel as well.

2008 and 2009 MaxxForce 7 (Engine Code V134) engines still use a single BorgWarner VGT turbocharger with an electronic wastegate actuator, while 2010 and up (Engine Code V152) models use a BorgWarner compound turbo system, as well as a new compacted graphite iron block that increases strength under higher boost. It’s worth noting that all 2008-2010 Ford 6.4L Power Stroke diesels (found in the F-Series trucks) also use the compound system. A compound turbo is similar to the sequential turbos used on the Mazda RX-7 and Toyota Supra from the 90s, with one small turbo that spools up quickly to reduce turbo lag, and a second larger one to make the big power numbers at high RPM – higher RPM, anyway, because an RX-7 revs to 9000 and most diesel engines top out at less than half that. The difference is that on a sequential system, both turbos still feed pressurized air directly into the intake tract, but on a compound system, the smaller turbo sends that boost into the larger turbo, to help that one spool faster as well. On the 6.4L Power Stroke, both turbos can be ordered and replaced as a complete compound turbo assembly (You can see the Ford Super Duty 6.4L Turbo here), which is what we recommend for lower labor costs and better long-term reliability. For the MaxxForce 7 with the compound turbo setup we offer the low-pressure turbo and the high-pressure turbo individually, and many of customers buy both the low and high pressure units at the same time since it's the same amount of labor.

If you are working on a MaxxForce 7 engine before model year 2010 (in North America), you can confirm you have the single turbocharger just by looking at the top of the engine. Here is a picture of the top of a MaxxForce 7 V134 Single Turbo Engine: 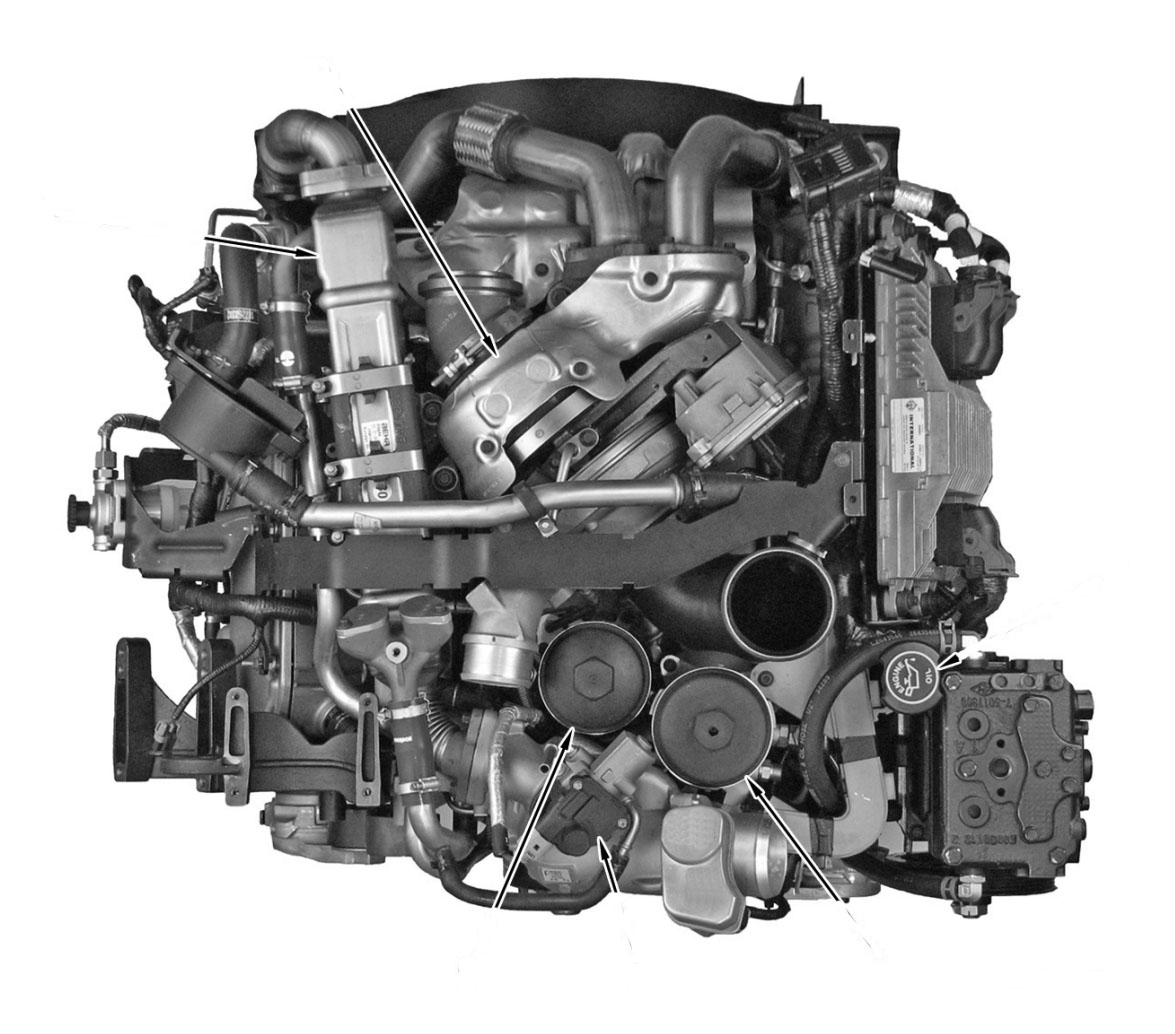 The single turbo on the earlier MaxxForce 7 engines is a BorgWarner B2UV-63 model. We offer this turbo both new and remanufactured. Follow the links below to see this turbo on our website:

If you are working on a MaxxForce 7 engine model year 2010 and up (in North America), you can also confirm you have the dual turbocharger setup by looking at the top of the engine. Here is an illustration of the top of a MaxxForce 7 V152 Compound Turbo Engine: 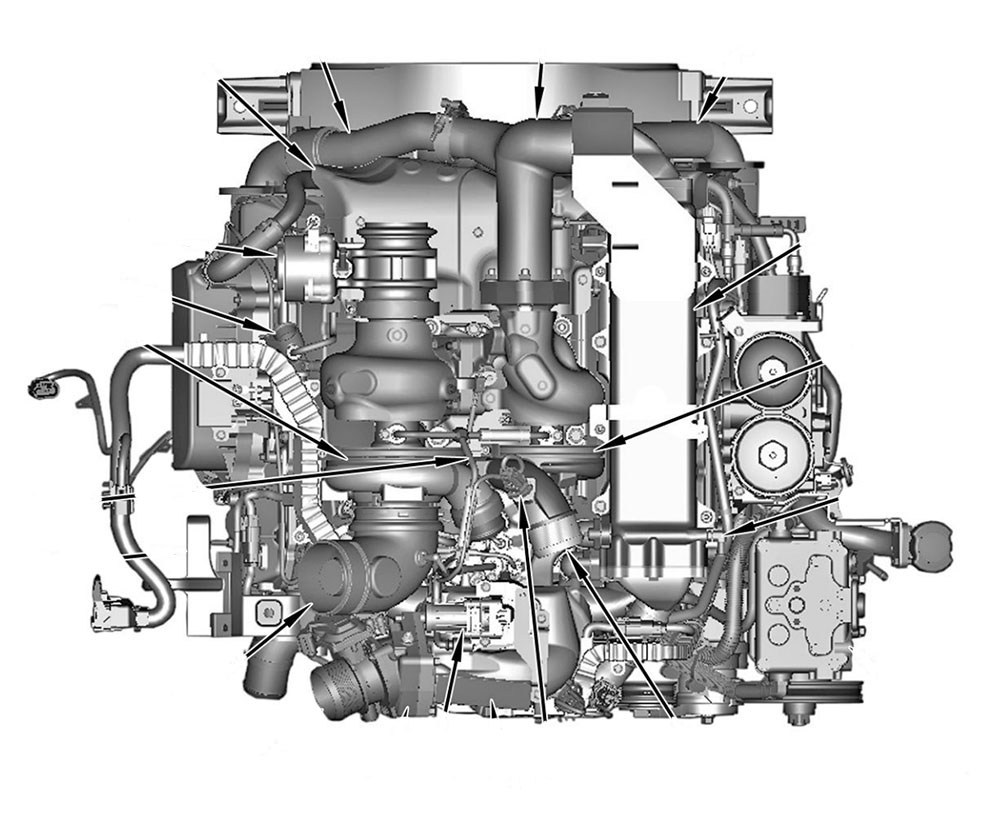 The low-pressure turbo is a BorgWarner B2FS model. If you need to replace the low-psi turbo, we offer both new and remanufactured options:

The high-pressure turbo is a BorgWarner B1UG model. Just like the low pressure, we also offer both new and remanufactured options:

If you have a MaxxForce 7 V179 engine, you will probably have the same turbo setup as the V152 engine, but we encourage you to contact us so we can confirm your BorgWarner or International Navistar turbo part numbers and make sure you get an exact match.

There are a few reasons why the VT365 has a better reputation for reliability than the mostly similar Ford 6.0L Power Stroke. It seems counterintuitive since the VT365 is installed in much larger trucks carrying much heavier cargo, but your average VT365 has an easier life than a 6.0L Power Stroke. Many of the miles it sees are on the highway, at a constant RPM, and it’s usually maintained by trained diesel experts at the kinds of specialty shops that have the space to work on a school bus or box truck. On the other hand, Power Stroke F-Series trucks are frequently used as commuter vehicles, often are modified, or tuned, and are commonly serviced by shops that do not strictly focus on diesel engines.

Because of EPA 2007 emissions standards, the MaxxForce 7 could not escape the 6.0L Power Stroke’s biggest Achilles’ heel, which was the exhaust gas recirculation (EGR) system. EGR is a headline feature of every MaxxForce diesel engine, and while it’s common and not really a reliability concern in gas engines, diesel exhaust is, generally speaking, much dirtier, which causes more EGR problems. Unburnt fuel in the exhaust gas can mix with oil vapors from the engine’s crankcase ventilation system, creating a sticky soot that coats small moving parts like turbo compressors, vacuum valves, VNT vanes and more, causing them to not work as effectively or even creating full-on blockages in passageways.

What’s unique about the MaxxForce engines is the effects of EGR clogging can cause damage well before the ECU notices anything and triggers a check engine light. This means that by the time you get a low boost code that brings your truck into the shop to get the turbocharger inspected, the vanes could be fully stuck or there could be damage to your turbo’s center rotating assembly, neither of which are practical to repair. One common remedy for this clogging on the Power Stroke trucks is to replace the square-shaped OEM EGR cooler with a round aftermarket one. Streamlining the flow of exhaust gases and removing corners for buildup to take place will keep the EGR cooler cleaner longer, though aftermarket solutions like that may not be as common for commercial trucks, and if they are, emissions compliance is another thing to consider.

While EGR issues were a huge headache to early adopters of EGR diesels, this technology has been around for nearly 20 years now, so your average diesel mechanic is very familiar with the issue. Cleaning or replacing EGR components proactively can really help reliability, and that way these repairs can happen on your schedule, rather than causing your truck to break down out in the field. Keeping up with regular maintenance schedules and keeping oil, oil filtration and air filtration systems clean are one of the best things you can do to prolong the life of your turbochargers. If you find yourself needing to replace a turbo on a MaxxForce engine, Contact Turbochargers Direct for friendly, expert support. We have an extensive catalog of new and remanufactured OEM turbochargers for every application, including name brands like Mitsubishi Heavy Industries, Garrett, IHI, Holset and more!