The Cruze, along with the Chevy Trax, Sonic and Buick Encore that also used the EcoTec 1.4T, were early innovators in the now-common practice of a smaller turbocharged engine replacing a larger naturally-aspirated one in the interest of fuel consumption rather than performance. Until this time, turbocharged engines were usually found in enthusiast vehicles, and not to generalize too much, but one could assume that those might be better maintained than your average Uber or rental car. Mainstream turbocharged vehicles were hitting the market just as manufacturers were extending their recommended oil change intervals from the 3,000 miles up to as much as 10,000 miles. A reliable supply of clean oil is the best thing you can do to increase the lifespan of a turbocharger, so extended oil change intervals contribute to Chevy Cruze turbocharger issues, including early turbocharger failure. Oil contamination and oil starvation are among the most common causes of turbocharger failure.

Bearing damage due to oiling issues is not unique to the Chevy Cruze turbocharger. A more common failure point, which also affects the Chevy Trax, Sonic and Buick Encore that also use the 1.4T (engine code LUV) is what’s known as an underboost code. This is caused by either the wastegate or bypass valve not closing all the way. If the wastegate cannot close all the way, exhaust gases that should be spinning the turbine wheel on the turbo’s exhaust side can escape through the wastegate. If the bypass valve (may also be known as a diverter valve, or the blow-off valve if it’s an aftermarket part that makes a PSHH sound when you let off the throttle) cannot close, then compressed air (usually referred to as boost) from the intake side of the turbo can leak from there, meaning lower intake air pressure (less boost) once it reaches the engine. Either one of these would cause a loss of power and a check engine light with code P0299.

There are two different turbos for the 1.4T EcoTec, but both of them have the wastegate and diverter/bypass valve built into the turbocharger itself, meaning the only way to fix this issue is a complete turbocharger replacement.

For the most part, we recommend OEM replacement turbochargers for these applications, but that doesn’t mean you have to pay dealer markup! General Motors does not manufacture their own turbochargers; they buy them from specialist manufacturers like  Garrett or Mitsubishi Heavy Industries (MHI). We can buy turbos from those companies as well, meaning we can supply the exact same part you get from the dealer, just in a different box and at a much more competitive price. This is also helpful if you are having a trusted mechanic install the turbo for you – some mechanics may have hesitation about installing customer-supplied parts, but that may be alleviated if it’s a name brand they recognize and have experience with.

For some more popular applications, we also offer replacements from  Factory Turbochargers, a quality aftermarket brand we have plenty of experience with. A Factory Turbochargers replacement turbo will fit and perform identically to the OEM part, usually includes all the gaskets required for installation, and is backed by a THREE YEAR, unlimited mileage warranty – triple what the dealership or most other brands offer!

We also offer our own Turbochargers Direct branded replacement turbos, both new and remanufactured. These can provide a better value than OEM, and come with a two year, unlimited mileage warranty. These also come from suppliers we trust, and are a great option when the OEM part is unavailable, discontinued or has an unaddressed design flaw (like the turbo we offer for the  Ford 6.7L PowerStroke diesel that replaces ceramic bearings on the exhaust side with stainless steel for better heat resistance).

There are 4 unique turbochargers equipped on various Cruze models, depending on the model year and engine option

The Cruze was redesigned for the 2016 model year, but Chevy kept selling the 2011-2015 model alongside it as the “2016 Cruze Limited”. GM has done this a few times in the past, usually to sell the older model as a low-priced entry for fleet orders or rental companies. The 2016 Chevy Cruze Limited will use most of the same parts from the 2011-2015 model. If you have a 2016 Cruze, please verify which one you have – you can just do a Google image search of “2016 Chevrolet Cruze” and “2016 Chevrolet Cruze Limited” to see the obvious difference and determine which one you have. This will likely be something to consider any time you order parts online for this car. 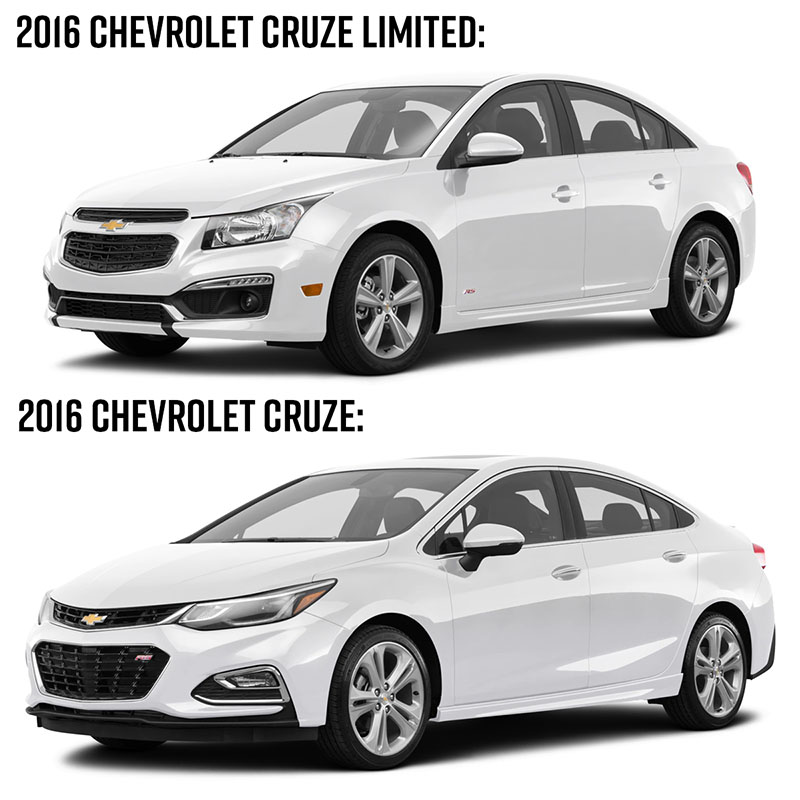 Every General Motors vehicle should have an option list printed inside the glovebox. If you have a 2016-2019 Buick Encore, please check that option list and look for the RPO code LE2 or LUV to confirm which one your car has before ordering. You can also check for a part number tag on your original turbo and search those numbers on our website, or contact us for friendly expert support. The LE2 engine option was discontinued after the 2019 model year, and all 2020-2022 models use the LUV.

For each of these turbos, we also have a complete install kit that includes all the gaskets required for installation. Our install kit for the LUV turbo also includes the oil feed line, in accordance with a General Motors technical service bulletin related to the oiling issue previously mentioned. We always recommend you at least clean out the oil feed and return lines with compressed air and carburetor cleaner, but replacing them is even better. Make sure you prime the center bearing of the turbocharger with oil before installation to make sure the bearing is protected on initial startup, and change the oil, oil filter and air filter during installation to better ensure long-term reliability.

Our comprehensive catalog is the best in the business, and we add new turbos every day. We have brand new or remanufactured options from OEM brands like Garrett, BorgWarner, Mitsubishi, IHI and more. If you have a turbocharged vehicle from GM or any other manufacturer that you cannot find on our site,  contact us for knowledgeable assistance in finding the correct replacement turbo for anything that left the factory with one!